Theresa May gets her heel stuck outside Number 10 Downing Street

Theresa May: "My pilot did not in any way put border security at risk"

David Cameron: Border Agency pilot "was... one I fully back and think that [Theresa May] was right to take"

Theresa May: "UKBA's statistics show that compared to the same period last year, the number of illegal immigrants detected increased by nearly 10%"

Labour MP Steve Rotheram, who led a Commons debate on the Hillsborough disaster, was moved to tears as he read out the names of the people who died.

Theresa May is confronted over her cat and illegal immigrant claims 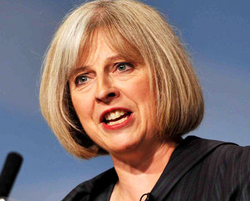 We learn about Mrs May's longstanding ambition to be Prime Minister, her unusual disinterest in political networking and her usefulness to a succession of Tory leaders. Listen here.

Posted by Tim Montgomerie at 7:30 AM in ConservativeHome.com, Theresa May MP | Permalink | Comments (6) | TrackBack (0)