Posted by Tim Montgomerie at 8:11 AM in Sajid Javid | Permalink | TrackBack (0)

Posted by Tim Montgomerie at 9:56 AM in Sajid Javid | Permalink | TrackBack (0)

Posted by Tim Montgomerie at 10:52 AM in Sajid Javid | Permalink | TrackBack (0)

There's been lots of attention in the last 24 hours at Evan Davis' Radio 4 interview with George Osborne. The Telegraph recorded the anger of Tory parliamentarians:

"Dan Byles, MP for North Warwickshire, said objected to the Chancellor being "badgered and shouted down" by the presenter. Baroness Jenkin, a Tory peer, said it appeared to be a "very unedifying interview/spat" and called on Mr Davis to "let the man speak". Another Conservative, Claire Perry, MP for Devizes, urged the BBC presenter to "stop interrupting and shouting down", adding "your mother would be disgusted"."

Reports have circulated that Mr Davis was spoken to by BBC high-ups after Craig Oliver, the Director of Communications at 10 Downing Street, had complained at constant interruptions of the Chancellor. A BBC spokesman noted the complaints but said there hads not been any reprimand of the flagship presenter. 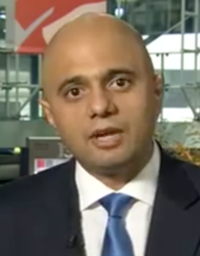 Over on Five Live Sajid Javid was also involved in testy exchanges. He repeatedly challenged the economic understanding of Drive Time's chief presenter Peter Allen and the Business Correspondent Dominic Laurie. On deficit and spending data he challenged the accuracy of the questions he was being asked.  "You've really got to get your facts right before you bring me on," he said. Continuing: "I'm shocked. You guys just haven't been briefed." Laurie seemed to openly recommend a Ballsian, debt-financed stimulus. There was not even a pretence of impartiality.

Listen to the interview below.

Posted by Tim Montgomerie at 6:20 AM in Sajid Javid | Permalink | TrackBack (0)

Posted by Tim Montgomerie at 4:46 AM in Sajid Javid | Permalink | TrackBack (0)

Sajid Javid MP tells BBCTV that Greece will default. He describes the €uro as a "bankruptcy machine".

Sajid Javid, the recently selected candidate for Bromsgrove, introduces himself and sets out his stall to the electorate