The newspapers are full this morning of Margaret Thatcher's fury at Ronald Reagan for the Gipper's eleventh hour suggestion that she abandon her successful 1982 attempt to re-take the Falkland Islands.

This seems a good moment to wheel out this clip from the Iron Lady movie. Playing Mrs T, Meryl Streep makes it clear to the US Secretary of State Alexander Haig (played by Matthew Marsh) that neither she nor the Royal Navy taskforce were for turning.

The Left are still struggling to come to terms with Maggie's steel - even today. Take this mean-minded Tweet from the Mirror's Kevin Maguire: 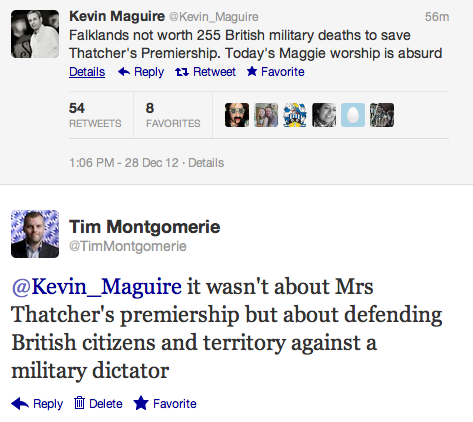 As Philip Blond then Tweeted: "One could argue that Thatcher defeated Argentinian fascism and gave the Argentine people their democracy". Indeed.

The Iron Lady rejects suggestions that she will abandon the recapture of the Falkland Islands
Dec 28, 2012 2:04:38 PM
Tim Montgomerie
Margaret Thatcher|